Wushu is the name given to chinese martial arts. A great number of schools (pei) are grouped under this name (round 150 presently in China, like chang quan, xingyi quan, bagua quan, nan quan, meihua quan, taiji quan, ...). Wushu is practiced since several thousand years but the practice has extended under the Tang dynasty as the Lords decided to organize public unarmed fights.

One does not practise wushu to fight, but to remain in good health and to defend oneself. The largest enemy is often inside each person and not around her.

Taiji Quan is one of the large branches of the Chinese martial arts. This art exists in China since at least 3 centuries. Its name comes from the philosophical term "Taiji" which appears the first time in Yi King (the book of the changes), anonymous writing of the Zhou dynasty (Xième century before JC): "In any change, Taiji exists, which is the cause of the two opposite ones. The two opposite ones are the four seasons cause, and the four seasons are the cause of the eight natural phenomena.". Here, the eight phenomena are: sky, ground, thunder, wind, water, fire, mountains and lakes.

Taiji Quan is an old wushu system that consist of a mixture of health exercises and fight techniques.

It differs from the other styles by its essential assimilation of Chinese traditional philosophy and its exercises borrowed from the dao ying, from yin-yang theory and from Chinese traditional medicine. Taiji Quan is at the same time an internal and external exercise. A regular practice makes it possible to cure some chronic diseases and to prevent some long-term diseases.

The spirit of the practitioner takes insurance and force by prolonging its capacities at work. It allows to push back the effects of ageing. For this reason, when practising Taiji Quan, one seeks a harmony of the thought, breathing and movement. The thought directs the body in soft, flexible and slow movements, starting the action of the muscles and internal organs in a perfect harmony.

Breathing is soft, deep and the rate is natural. The thought propagates the qi in the cellular membranes, the articulations, in the skin, until the end of the fingers and toes.

While completely releasing the body and the spirit, one brings calm and the restoration of the yin-yang balance, freeing the channels of qi called jing luo and increasing blood circulation. The practice of Taiji Quan develops also human body resistance, body stability, mobility and the internal force.

There are several opinions concerning the paternity of Taiji Quan, but it is generally accepted that the honor returns to Chen Wangting which lived at the 16th century. Although nothing is precisely known of its life and dates of birth, it was confirmed that he belonged to the 9th generation of a Chen family, Wenxian country, in the province of Henan. According to local chronicles', he served as royal guard in its village until the fall of the Ming dynasty (1368-1644). In a book written in its last years, he writes: "Now I'm getting old, my only companion is a book written by Huang Ting. I study the martial arts during the calm periods and I work in the fields during the high season. I take pleasure to teach my disciples, children and grandchildren, it does not matter what they will become, dragons or tigers."

By creating Taiji, Chen Wangting was influenced much by Qi Jiguang (1528-1587), a famous imperial general, which had compiled in a book 16 sequences built on his fight technique base on 32 movements. Among these movements, 29 were retained and adapted by Chen Wangting in his form of Taiji. He exposed the principal points of his teaching in a song he composed with the aim of facilitating the work of memory. 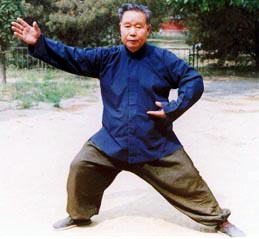 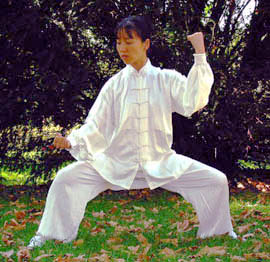 Born in a poor family in Yongnian, in the province of Hebei, Yang Luchan leaves his family at the age of 10 to enter into the service of the Chen family in Wenxin. His Master, Chen Dehu, is a member of the imperial academy passionated by martial arts. He employs Chen Changxing, of the 14th generation to teach wushu to the young men of the family. Yang Luchan becomes his disciple, works assiduously and becomes himself a great wushu master. Yang went back to Yongnian as he was 40 years old and lived in a pharmacy rented by its former Master Chen Dehu. He continued his life teaching Taiji Quan. Later on, Yang left Yongnian for Beijing. He adapted his form of Taiji, dedicating it to people whose main goal was to remain in good health. 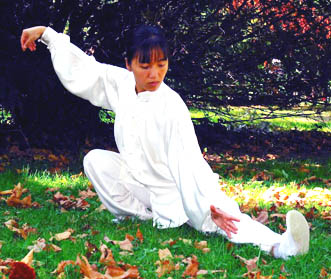 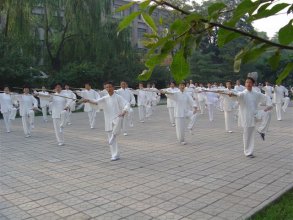 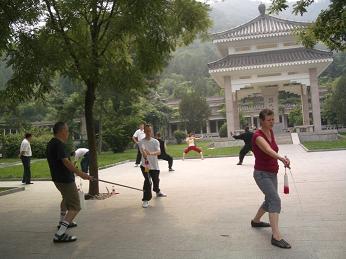 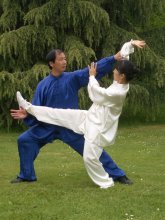 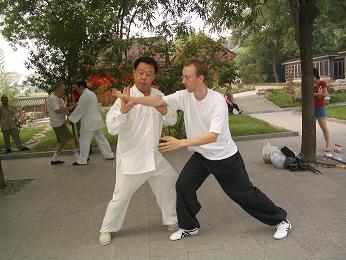 Meihua Zhuang, also called Mei Quan (boxing of the plum tree flower pillars) is one of the old Chinese wushu style. It is popular in the provinces of Hebei, Shandong and Henan. It is unique by its style and its art of attack/defense. It is practised with or without instruments. The movements of Meihua Zhuang are characterized by their simplicity and their fluidity. This style of wushu takes the difficulty as a joy given to the wushu-student when overtaking this difficulty. Supple and vigorous at the same time, combining dynamic phases with static one, internal exercises (Neigong) and external (Waigong), Meihua Zhuang has advantages from the point of view of health as well as from the point of view of self-defense.

The work of the postures is the base of the practice of the static force. From the physiological point of view, the functions of coordinations and the possibilities of the body can be improved and inertia of the internal organs can be overcome. Gradually, the wushu-student develops skills (dynamic power) thanks to which energy is not dissipated. The face color does not change (a peaceful state of the body and spirit is reached). Then, it is the accomplishment of the work of intern essence (or energy), of spirit and body. This result might also be called: "energy economy". Meihua Zhuang is related to the philosophical theory of the transformation and the Yin-Yang complementarity. It is a very effective martial arts. 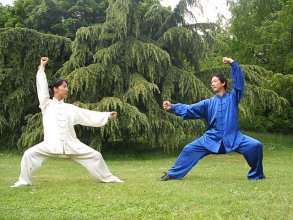